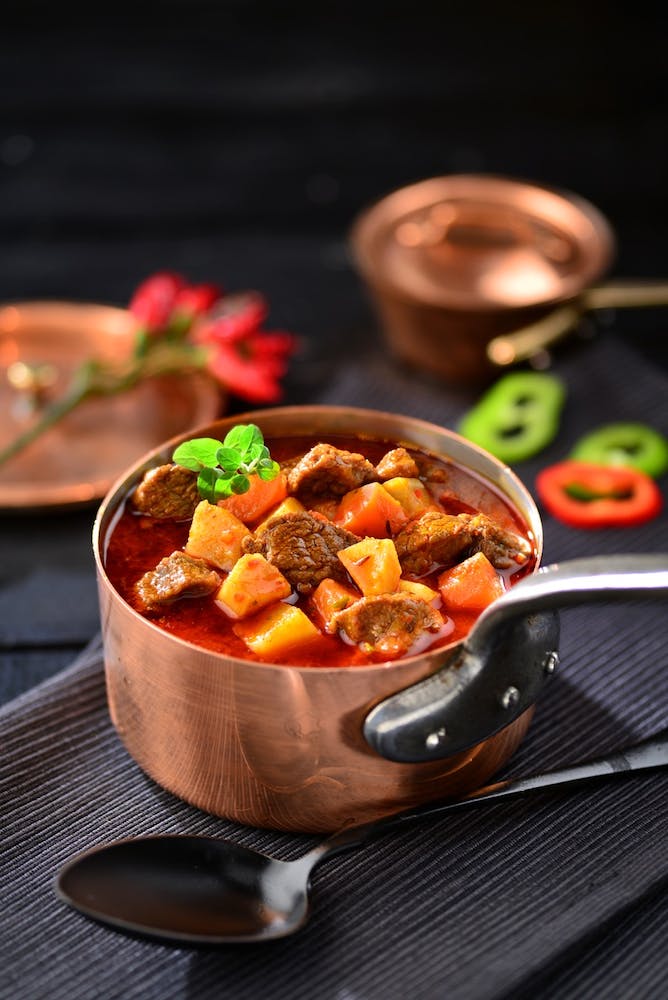 Indeed… How?
You who visit our beautiful country probably already have an idea about Hungarian cuisine, but you might not know what to really expect in terms of gastronomy. Be aware that though most people are not travelling to Budapest for the food, most of them are positively surprised by Hungarian cuisine. To be honest, if you are vegan and do not like paprika (the number one spice in Hungary), or if you are on a low-carb diet, it might be challenging to eat like a true local. But if you are none of those: unfasten your seat belt,-)

First of all, what do we eat in Hungary? 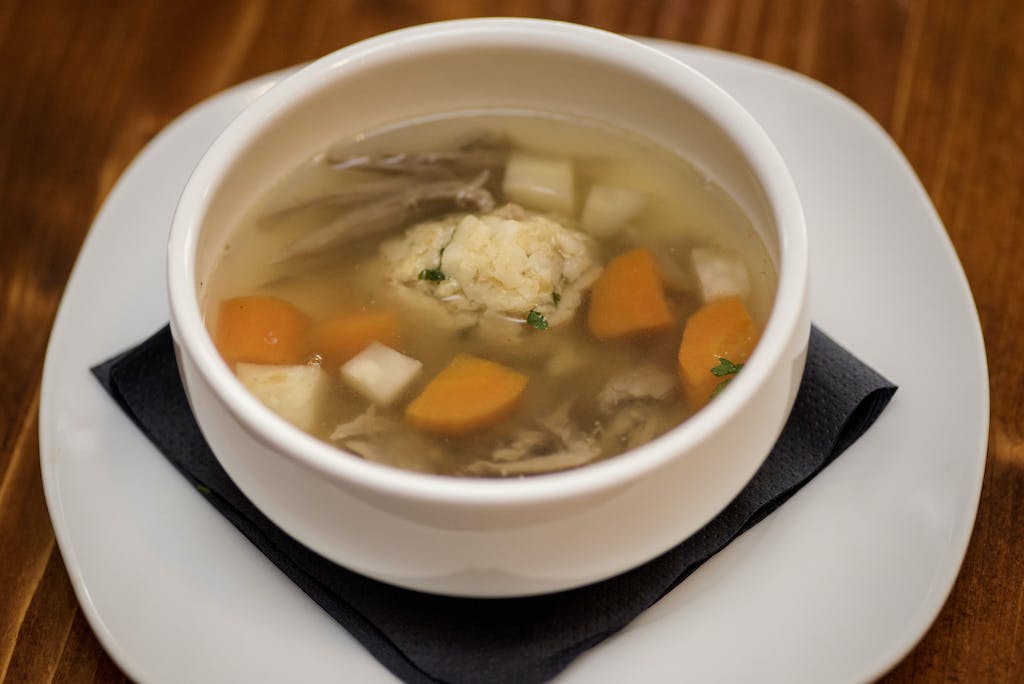 A typical Hungarian meal is composed of a bowl of soup as a starter, and a slow-cooked meat dish, such as a stew, with maybe a few pickled veggies on the side. In Hungary, we rarely sear the meat, nor have proper sandwich bread, making Hungarian street food rare.

Most Hungarians are not going daily to restaurants, even if they are working far from their home. Yet you cannot survive cold winters only with snacking, not mentioning that cutting salami on your office desk lacks glamour. Enter a « Lacikonyha ». Laci, as in «Small Ladislau », konyha as in « kitchen ». Though origins of the expression are disputed, all Hungarians agree on the concept: an outdoor or indoor food stand where you can eat pre-prepared Hungarian classics. Such as a hot bowl of gulyás leves (Goulash soup), grilled meat or sausage, stuffed cabbage or pepper, cantine-style. Our best recommendation for such a meal is to mix with the eclectic crowd of lesser-known markets, such as the Rákoczi Square market in the 8th district, where you have several options to eat like a local. 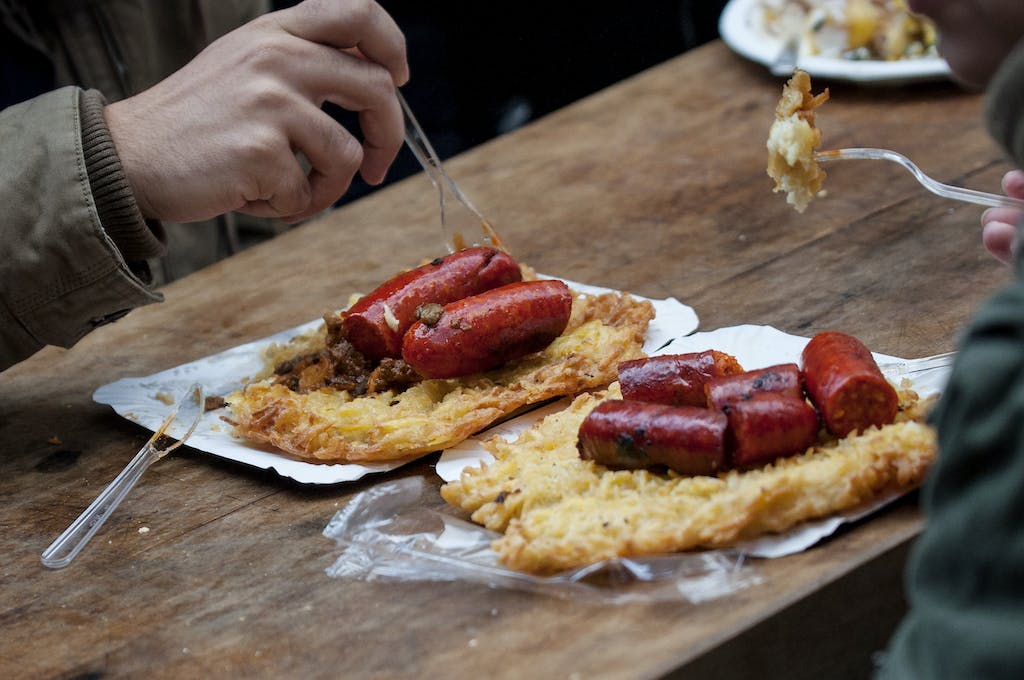 Slightly different from the « Lacikonyha », some butchers «hentesáruk» used to roast on the spot traditional sausages and meats, served on paper plates with mustard and a choice of pickled veggies, such as gherkins and cabbage-stuffed peppers. Hentesáruk serving hot food are still existing in modest neighbourhoods and sometimes markets but pretty much disappeared from Budapest city-centre. The «Belvárosi Disznótoros», the « city centre pig slaughter», still exists though and opened a second store a few years back. They do not sell non-cooked meat and are focusing on the roast side of the concept, and are very popular among locals. The popular eatery and one of Budapest Urban Adventures’ favourite partners is « Mangalica mennyország » at Klauzál Square market. This shop is selling the delicious meat of the traditional Hungarian pig, the “mangalica” that you hardly find in smaller eateries. Some trendier and less conventional options such as Töltő, or Faszaládé are also offering fantastic food experiences. 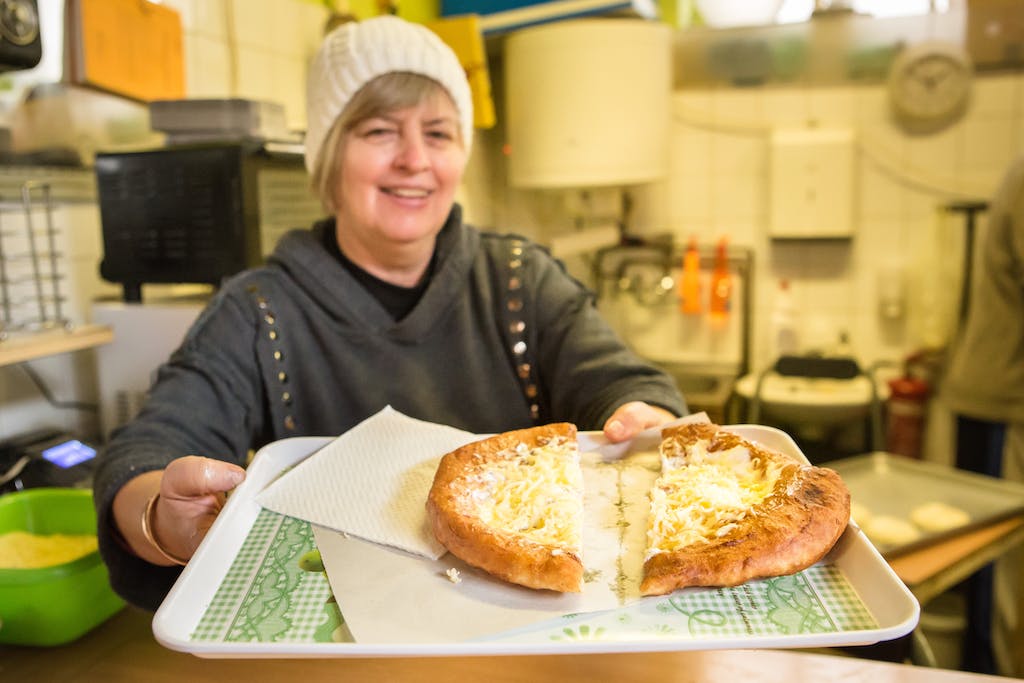 “lángos with cheese and sour cream “

I guess by now you understand that markets are the places to be. What else can you eat in markets? Well… At Rákoczi market mentioned above, a lovely couple is preparing THE BEST (and most affordable) lángos on earth (we are barely overstating, but Budapest Urban Adventures also approves this). What is a lángos, you’ll ask? A lángos is something your doctor would forbid but that, of course, we looooooove and eat anywhere and anytime in Hungary. When it’s cold or hot, when it snows or on the beach, in the morning, after a night out or just because… It is a delicious freshly deep-fried dough (best if done when ordered), with salt and a few options of extras. The most popular choice is with garlic, sour cream and grated cheese on top. A new trend of lángos emerged in the past few years: the lángos-burger. First shockingly unorthodox for tradition lovers yet the first unholy bite put an end to any resistance. Other than in market halls, lángos stands can often be found next to or in metro stations, and in leisure areas such as parks and swimming pools. It is not unfrequent that rolled « palacsintak » (pancakes) are sold on the same stands as they are equally popular. Pancakes are served with jam, chestnut cream or only sugar and cinnamon. To taste more amazing food book on our Bites & Sights food walking tour 🙂

By clicking or navigating the site, you agree to the FareHarbor Terms of Service and Privacy Policy, and to our partners’ use of data related to your use of our website. Like other websites, we use cookies and similar technologies to collect that data in order to deliver personalized advertising based on your interests. See Our Use of Cookies to learn more about your rights and our partners. Dismiss